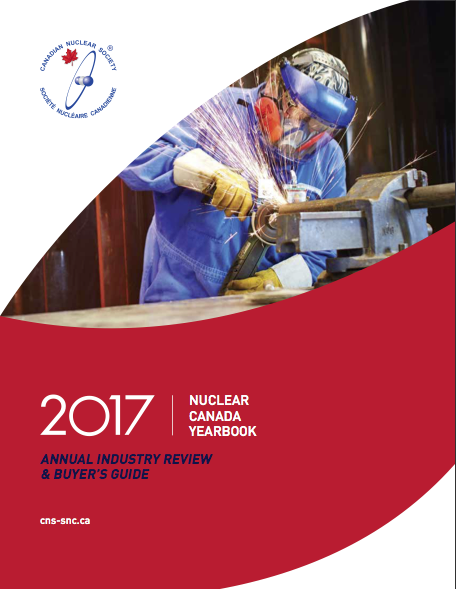 It has been a very challenging, exciting and fruitful year for me as President, for the CNS, and for the nuclear industry. What with the ongoing refurbishment at Darlington, the several joint ventures between industries of various countries the nuclear industry never lacks excitement.

The CNS year started after the 19th Annual General Meeting on 19th June in Toronto. This was followed immediately with the 36th Annual Conference at the same venue. It was a great conference with the 2015 Nobel Laureate in Physics (Arthur McDonald) delivering a talk on the topic that won him the Nobel Prize.

A number of other successful conferences and courses were held during the year. Among them were:
• CNS CANDU Reactor Technology & Safety Course;
• 4th International Technical Meeting on Small Reactors (ITMSR-4);
• 3rd Canadian Conference on Nuclear Waste Management, Decommissioning and Environmental Restoration; and
• 13th International Conference on CANDU Fuel.

Many thanks to the volunteers that made these possible.

In the 2012/2013 Council Year, the CNS launched the Nuclear 101 Course. The success of this course since then has resulted in putting on the course at least twice a year. Great job by the Education and Communications Committee (ECC), the custodian of the course. As a result of this success, and due to demand from the nuclear industry, the CNS, through the ECC, is concluding the process of putting on a new course – Nuclear Safety Culture Foundation Course. We look forward to the start of this initiative.

Before the end of last Council Year, the CNS Executive took the initiative to visit some stakeholder industries. The initiative termed “Relationship Visits” was for CNS to establish a better working relationship with the Management of these various establishments by understanding their needs and rehashing areas of common interest. This initiative was continued this year and has so far proven to be a very successful venture. Thanks to Paul Thompson who was given the mandate to spearhead the initiative, and who has done a great job of it. The team has visited 12 establishments, including the three Utilities. This fits well into the 2017-2022 Strategic Plan of the Society. The Strategic Plan Committee led by Jacques Plourde has put together an achievable and realizable 5-year plan for the CNS. The committee is also overseeing the implementation of the plan.

This year, the Branch Affairs and the International Liaison Committees jointly established a new initiative. It involves having an expert from one of our sister International Societies coming to give talks in our Branches, with a reciprocal visit from one of our experts to the sister Society the following year. Arrangements have been concluded to have the first Speaker come from the Nuclear Institute (Britain) in October/November this year. CNS expert will be going to Britain in the Fall of 2018. This is great for the Branches which have been marvelous throughout the year.

In 2012, the CNS for the first time participated in the Federal Government’s request for expressions of interest in AECL. Since then, the Society has actively participated in similar Hearings. This year, CNS was invited by Parliament to make presentation before the House Standing Committee on Natural Resources. Another Intervention presentation by CNS on NB Power license extension was in May this year.

In Paul Thompson’s report last year, he concluded by saying “I offer to him (incoming President Peter Ozemoyah) my continuing support throughout the coming year” I will say here that Paul kept that promise; and I am making the same promise to the incoming President Daniel Gammage.

It has been a great year for me. I hope it was for you too. View Nuclear Canada Yearbook 2017 (PDF)